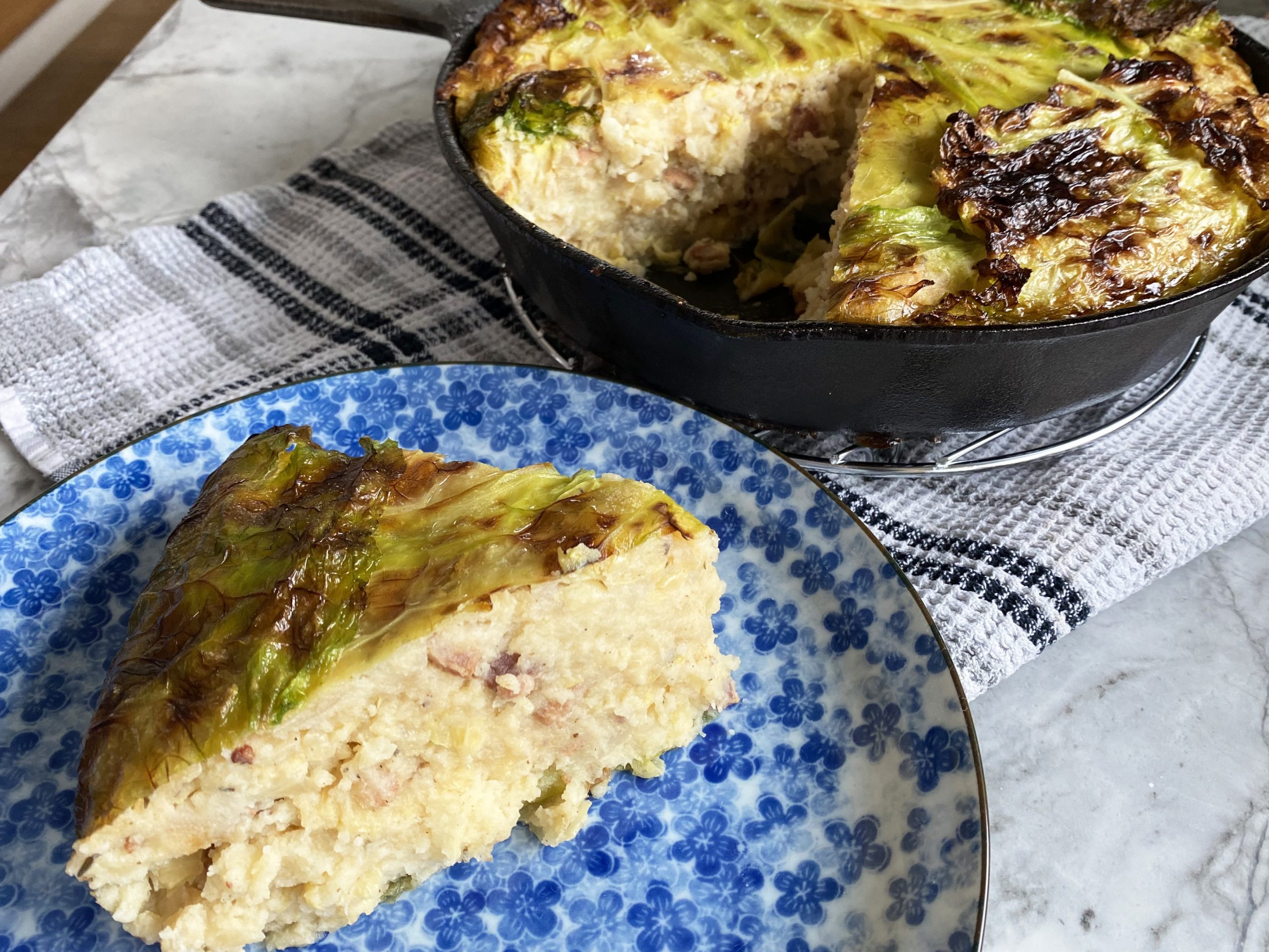 Not the most eye-catching title, but honestly a brilliant, tasty, tasty meal that everyone loved.  I saw it being made online at Epicurious, and I recommend watching the video – boil the leaves, mash the potatoes with lots of good bacon, fold it altogether into a beautiful pie surprise and you have a brand new twist on some very hearty vegetables.  One of the perks was opening a full package of thick-cut bacon…I used about a half pound for this pie and then had a perfect excuse to whip up a small batch of Bacon Jam with the rest!

kosher salt AND butter as needed

To prep the cabbage, carefully remove and discard any damaged outer leaves and then cut (from the base) and carefully remove about 10 large leaves that you will use to wrap the pie.  Drop these into your large pot of boiling water water for a few minutes until they soften, and then remove them with tongs to a clean kitchen towel to dry.  I did this ahead and just left the cabbage leaves sitting on the counter for a few hours, but if you’re making the pie straight away, drop them into a bowl of ice water to cool them off before drying the leaves.  When the potatoes are tender, drain them and return them to the pot with about 2 tablespoons of butter and mash them a bit.  Thinly slice the remaining cabbage – you should get 3 to 4 cups (I had such a huge head of Savoy cabbage that it actually made 2 separate ‘cabbage dinners’ for us!).

Cook the bacon in a 10 to 12-inch cast iron skillet over medium heat until the bacon is good and crisp and then add in the sliced onion and cabbage.  Cook on medium-low until the vegetables have softened and have maybe even begun to caramelize – this will take about 20 minutes and there will be almost no liquid left in the skillet.  Add in the vinegar and scrape up all of the browned bits, then mix in the thyme, pepper and a good pinch of salt.  Remove the skillet from the heat.

Whisk the eggs and cream together in a small bowl, add to the potatoes (drained and still in the pot with that bit of butter) and give the potatoes a good mashing until smooth.  Stir in the bacon/cabbage/onion mix and the grated cheese until well combined.  Taste for seasonings – salt may be needed.

To assemble the pie – use the same cast-iron skillet and dot a tablespoon or 2 of butter around the bottom.  Line with the floppy cabbage leaves, making sure that the skillet is completely covered and that there is enough overhang for the leaves to cover the pie after it’s filled.  Scrape the potato mix into the pie ‘crust’ and smooth the top, then fold the leaves over top, adding one in the middle if needed, to create a single layer of cabbage cover.  Dot the top with another tablespoon or so of butter.

Roast the cabbage pie for 30 to 40 minutes until the top is browned and beginning to crisp then allow the pie to rest for about 10 minutes before cutting into slices and serving – enjoy!