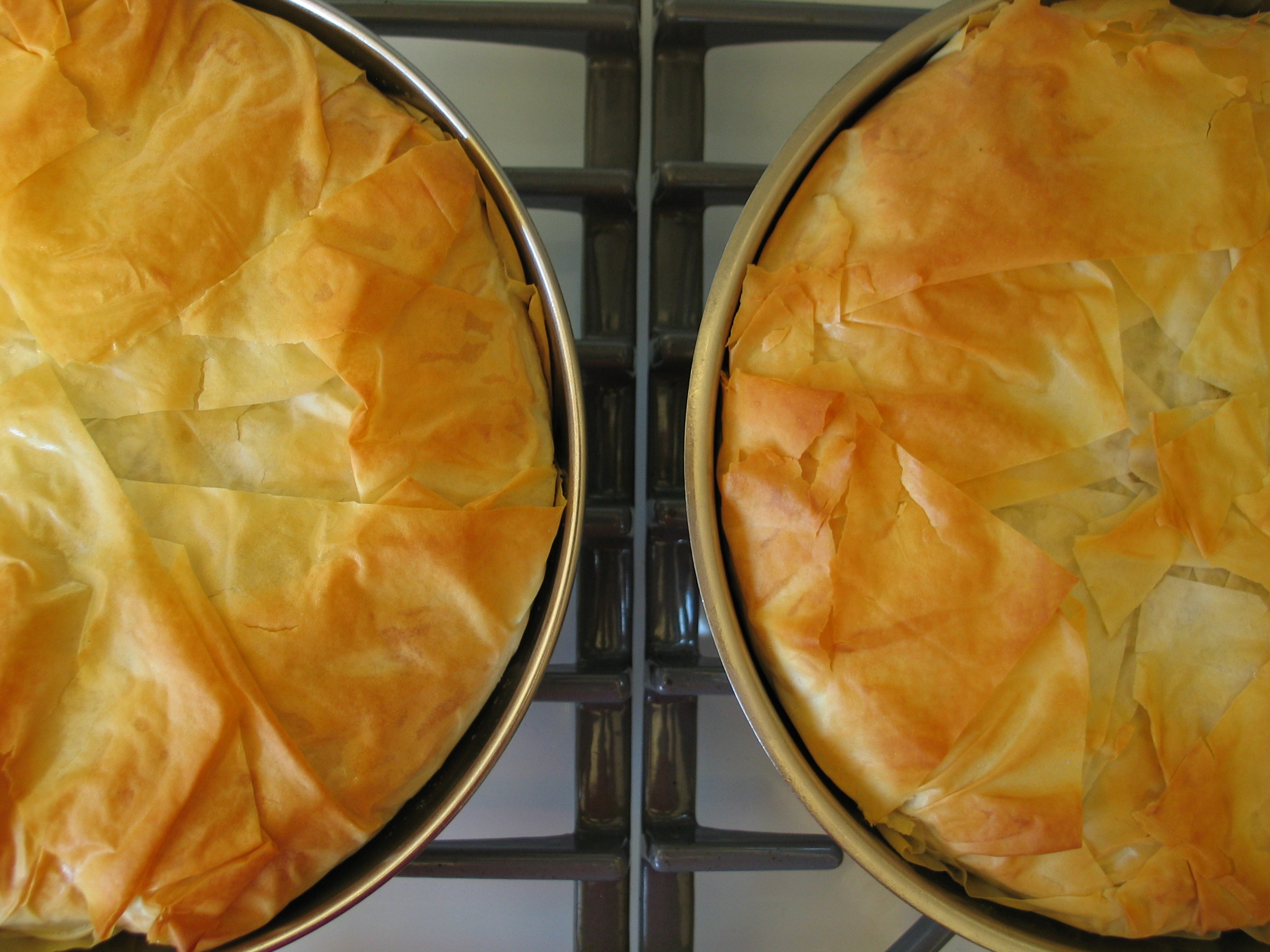 I admit that this looks complicated, but it’s one of my ‘top 3’ meals of all time.  I’ve adapted it from a friend who served it at one of her dinner parties, and we’ve been loving it ever since.  It can be broken down into 4 sections; the phyllo (nothing to prepare, just remember to take it out of the freezer), the chicken (this can be done ahead), the egg mixture (made with the chicken juices, this needs to be done right at the end), and the almond and sugar mixture (this can be done ahead).  It takes time, but it’s SOOOO worth it!

Either put it in the refrigerator overnight to thaw, or leave it on your counter for a couple of hours before your meal.  Don’t open it until you’re ready to use it.

2 T. EACH butter AND icing sugar 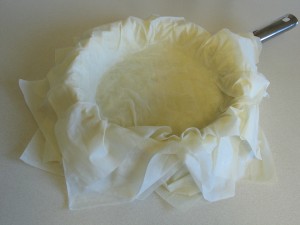 Saute the almonds in the butter for a few minutes until the almonds just start to brown.  Remove the skillet from the heat and stir in the sugar and cinnamon.  Set aside until you’re ready to assemble the pie. 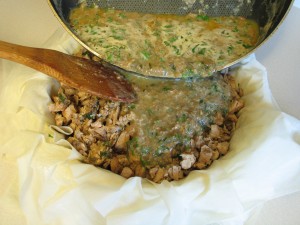 Heat a large (I use non-stick) skillet over medium heat and add a bit of oil.  Add the onion and cook for a few minutes until softened, then add the garlic, ginger and cinnamon and cook for a couple more minutes.

Add the chicken to the skillet and season with the salt and pepper and brown each side for a couple of minutes.  Add the broth, chili sauce, coriander and parsley and bring to a boil.

Lower the heat and simmer gently, uncovered, for about a half hour, or until the chicken is cooked through.  Remove the chicken only, allow it to cool, then shred or chop it finely and set it aside until the pie is going to be assembled.  Reserve the skillet and it’s contents.

Once the chicken has been removed from the skillet, the remaining sauce needs to be reduced, this will take about 10 minutes.  Simmer it until the ‘sauce’ is basically a paste – or your finished pie will be way too juicy.

Mix well and then reduce the heat to low.

Add the eggs and continue cooking on low while stirring until the mixture has thickened slightly and you can see bits of scrambled egg starting to form.  Then stir in;

This is the last ‘mixture’ to be added to the pie as it’s being assembled. 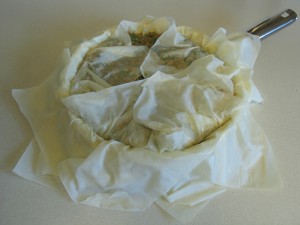 Preheat the oven to 375, melt about 3 T. of butter (olive oil can also be used) and open the phyllo.  Brush a 10 inch oven-proof skillet with butter and lay down a piece of phyllo, carefully molding it to the bottom and sides of the pan.  Continue to drape about 8 more sheets of phyllo, overlapping slightly, so that the phyllo edges hang over the sides and you can no longer see any edge of the pan.  Brush each sheet with butter between each layer.

Fill the bottom of the phyllo lined pan with the almond sugar mixture, then add the shredded chicken.  Pour the egg mixture over top all of it until the pan is full – you may need to move the chicken around a bit to make it all fit.

Starting with the inner layer, carefully re-fold the phyllo back over the pie.  Brush each piece with butter and continue to re-layer until the pie is covered.  Brush the whole top of the pie with butter and bake for 35 minutes.  Let the pie rest for about 15 minutes before cutting into it and feel free to sprinkle it with icing sugar and cinnamon.

Normally we’d enjoy this with some fancy rice – basmati with chopped raisins, dried cranberries, parsley or even apricots to make it look pretty, and a vegetable.  Tonight though, because I went to the trouble of making 2 pies, we skipped the rice and enjoyed it with  a cold asparagus salad.  Ooohh, la, la.