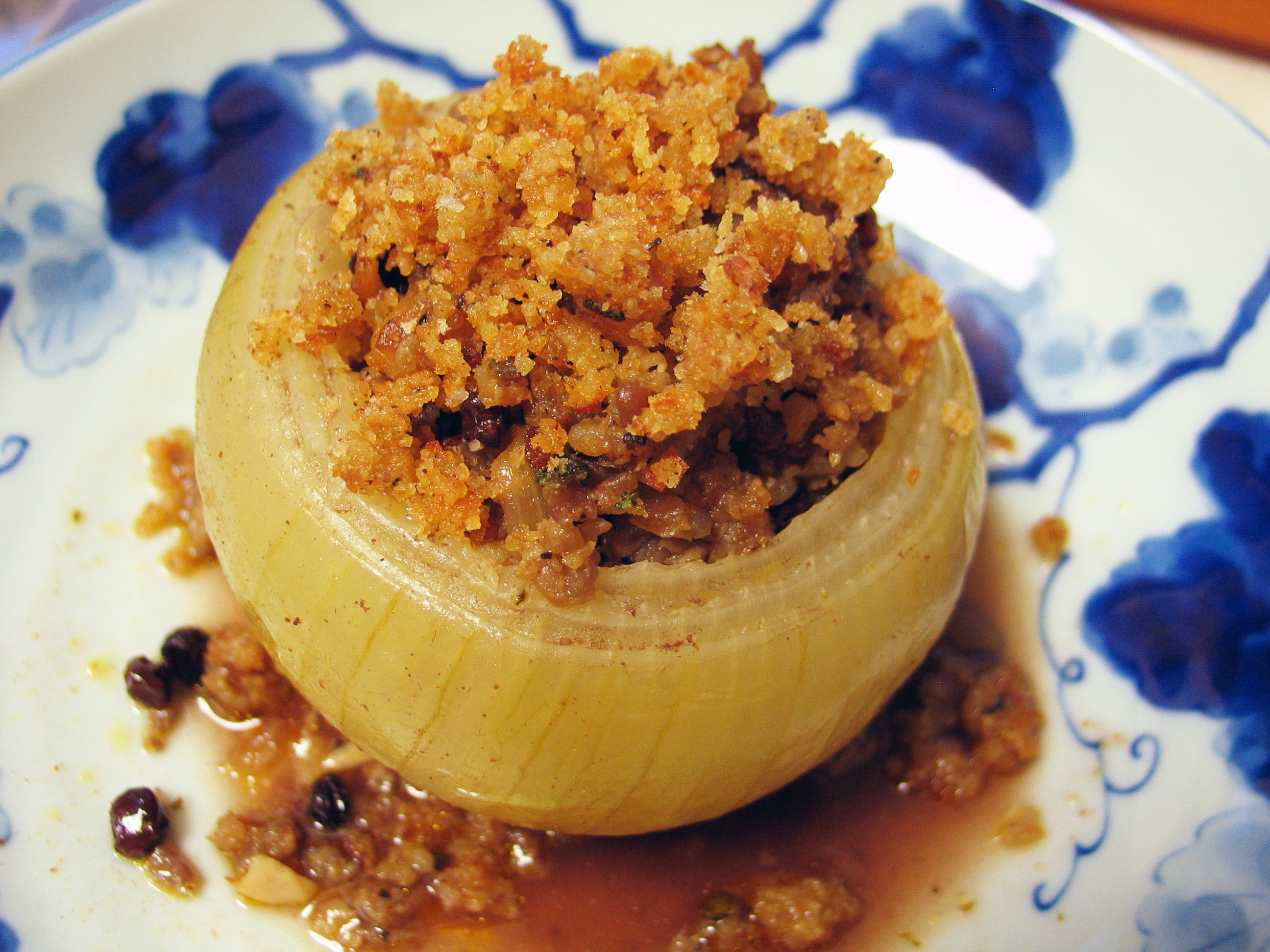 I found this in Dina Cheney’s, ‘Year-Round Slow Cooker’, and it’s complicated…but mostly from the time perspective, we all still felt it was worth it as a fancy appetizer.  If you don’t feel like going to the trouble of stuffing an onion, we also thought the sausage mix would make a great meat pie or tart – enjoy! 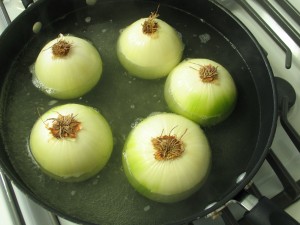 1 piece of white bread, torn up

Pour about an inch of water into a large skillet and bring it to a boil.  Cut off 1/4 inch from each onion’s stem (not the hairy end) and peel off the outside layer of skin without removing the root (hairy) end.  Place the onions in the water, cut end down and boil for 15 to 20 minutes until the centers are tender enough to scoop out.  Transfer the onions to a plate until they’re cool enough to handle and then scoop about 1/3 cup out of each – I found that a grapefruit spoon worked really well.  Chop the scooped out onion and set it aside, you’ll need about 3/4 cup – I also thought I could have done this step the day before.

Put the currants in a small bowl, pour the port over them, let them soak for 15 minutes, then drain them so the port goes into a small pot.  Add the broth, butter and sugar to the port, bring it all to a boil while stirring and continue to boil for 5 to 10 minutes until the mixture is slightly reduced – then pour this into your slow cooker.

Pour the milk into a medium bowl, mash it up with the torn bread until you have a paste, then add in the sausage meat and mix well.  Heat the oil in a large skillet, then add in the garlic and reserved chopped onion and cook for a couple of minutes.  Add the sausage mix and cook and stir until there is no longer any pink, making sure that you’re breaking up the meat as it cooks.  Stir in the sage and drained currants and then allow the mixture to cool a bit so you can stuff the onions – you could probably make the stuffing a day or so ahead as well.  Carefully and evenly spoon the filling into each onion – overflowing is fine – then carefully place the onions in the slow cooker so they’re all standing on their own.  Cook on low for about 4 hours until they’re tender (stab one with a fork), they should still be able to hold their shape.

For the topping (I feel this could also be done ahead), heat the oil in a small skillet, saute the garlic for a minute or so, then add in the breadcrumbs, sage, salt and pepper and cook and stir for a couple of minutes until the breadcrumbs are golden.  Remove from the heat and set aside until you need them.

To serve, use tongs to dish up the onions, spoon some sauce from the slow cooker over top, and sprinkle with the crispy breadcrumbs.  Super tasty!