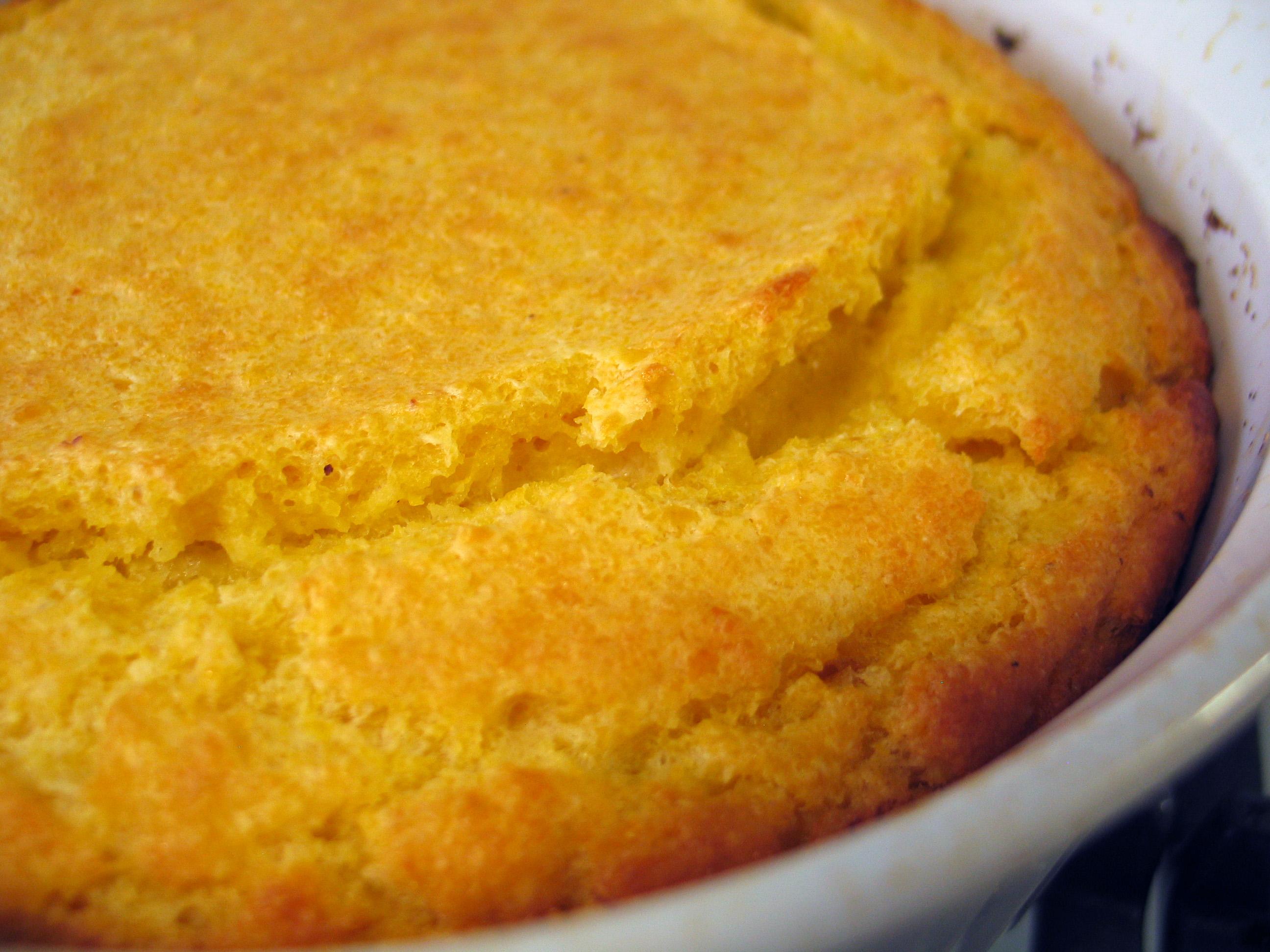 This has been in my ‘pile’ for ages and I borrowed it from Smitten Kitchen.  It’s more of a souffle than a bread (fancy cornbread?) and it takes a bit of time to make but it was really great and we all loved it (drizzled with a touch of honey).  This was part of Saturday night’s dinner with some sauteed zucchini and red onion, and what we call ‘Coke Ribs’ (pork ribs simmered in Coke for 2 to 3 hours then lathered with Ron’s Rich and Deeply Satisfying BBQ Sauce, which I usually have in the freezer, and then the ribs are crisped up on the barbecue).  This would be a brilliant side dish to enjoy with just about anything, especially if you’re a fan of cornbread.

1 t. EACH sugar AND salt

Very generously grease a 2 1/2 L casserole dish (I could have used a slightly smaller one) and in a small bowl, whisk together the cornmeal and 3/4 cup of milk and set aside.

Melt the butter in a large pot over medium-high heat and add the corn.  Cook the corn until it starts to brown which could take anywhere from 2 (if it’s fresh) to about 10 minutes (which is what my canned corn took), then add in the sugar, salt, cayenne and remaining 2 cups of milk and bring it to a boil.  Remove the pot from the heat, cover it and allow the mixture to sit for 15 minutes to steep (I was doing about 10 things at once so it sat for probably 45 minutes).

If you have an immersion blender, use it now to puree the mixture in the pot – mine doesn’t work as well as it could so I transferred it all to my food processor to puree it and then poured it back into the same pot.  Once it’s back in the pot bring it back to a boil, reduce the heat to low and add the cornmeal and milk mixture (which will be a bit stiff), whisking constantly until this new mixture has thickened – this should take a few minutes.  Remove the pot from the heat again and allow it to come to room temperature – I actually did this ahead and let it sit for about an hour – the mixture resembled muffin batter.

Now is when you can probably preheat the oven to 400.  Once your corn mixture has cooled, whisk in the egg yolks (I just used a spatula), and then in a separate bowl beat the egg whites and cream of tartar until soft peaks form.  Fold the egg whites into the corn mixture about 1/3 at a time and then pour the batter into your prepared dish.

Bake for about 45 minutes until the spoonbread is golden brown and has risen (ideally) above the rim of the baking dish.  Serve immediately – it will taste just as good as it looks!