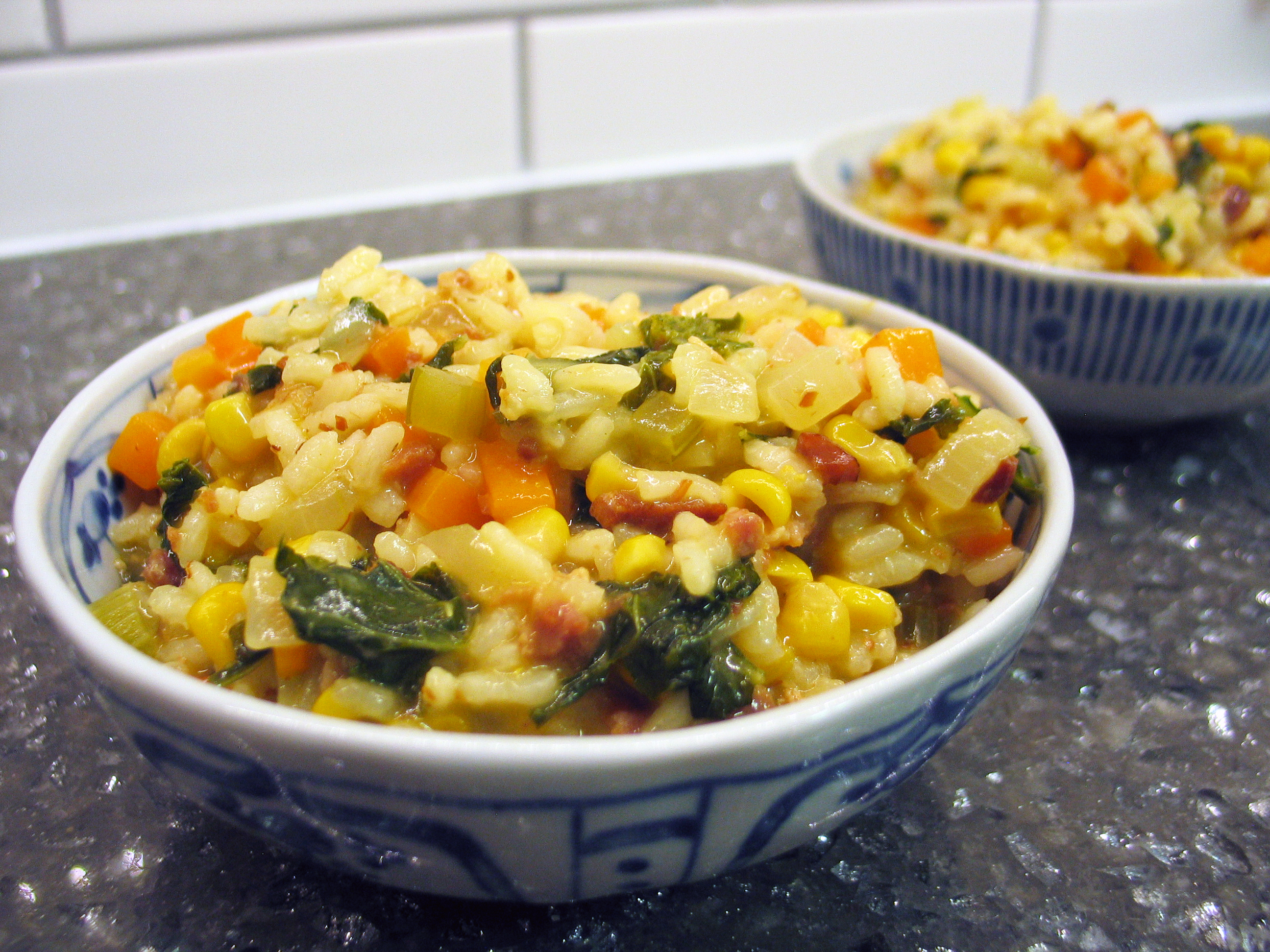 It was a long weekend so we had friends over for dinner last night (Monday), I wanted risotto, so we made this recipe (also from that cooking class taught by Allan Shewchuk) with ‘Coke Ribs’ and grilled asparagus, as well as a plum dessert.

Coke Ribs are simply pork ribs simmered in cola for 2 to 3 hours before draining and drying them as best as you can, slathering them with your favorite BBQ sauce – in this case Ron’s Rich and Deeply Satisfying BBQ Sauce (we had some in the freezer), and crisping them up for a few minutes on the grill.

We stole the idea for the plum goodness from Brock’s parents – candy plums pitted and cut up (also called prune plums), some brown sugar and a bit of cornstarch, all tossed together and put into a casserole dish with a pastry crust.  Think of it as a fast pie, and it’s another recipe where the only way to really ruin it is to burn it.

Now for the risotto – keep it simple, stir it often and add broth until the rice is done – that’s it!  **I’ve also added leftover kale and made the chopped the vegetables into a fine, visible dice – this can easily be whipped up into a one-pot weeknight meal!** 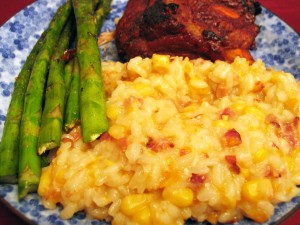 Ideally you should use fresh corn on the cob, boil or roast it and cut it off the cob, as well as raw bacon that you would cook for a few minutes before adding the butter and the chopped onion, carrot and celery.  Whenever I open a package of bacon though, it’s thick-sliced and I get Brock to barbecue it all so that whatever we don’t use, I can cook with – that’s what I did here.  I also put the onion, carrot and celery through the food processor.

Saute the bacon if needed in a large pot then add the butter and the onion, carrot and celery.  Cook for at least 5 minutes until softened, turn the heat up to high and then add the rice and cook for a couple of minutes until well coated.  Pour in the wine and cook while stirring until it’s evaporated and then gradually start adding the broth a cup or so at a time.  Risotto works best if you cook it as hot as you can, while adding the broth – it can’t go dry! – and stirring regularly.

When the rice is about halfway cooked, maybe 10 minutes in, add the corn and bacon and continue with the addition of the broth.  I find that risotto usually takes about 20 minutes and that I usually use about 7 cups of broth, I also find that you shouldn’t ever need to add salt because of the broth and the cheese.

When the rice is cooked and the mixture is still quite moist, remove the pot from the heat and stir in the cheese.  Serve straight away, it will slowly solidify if you let it sit!