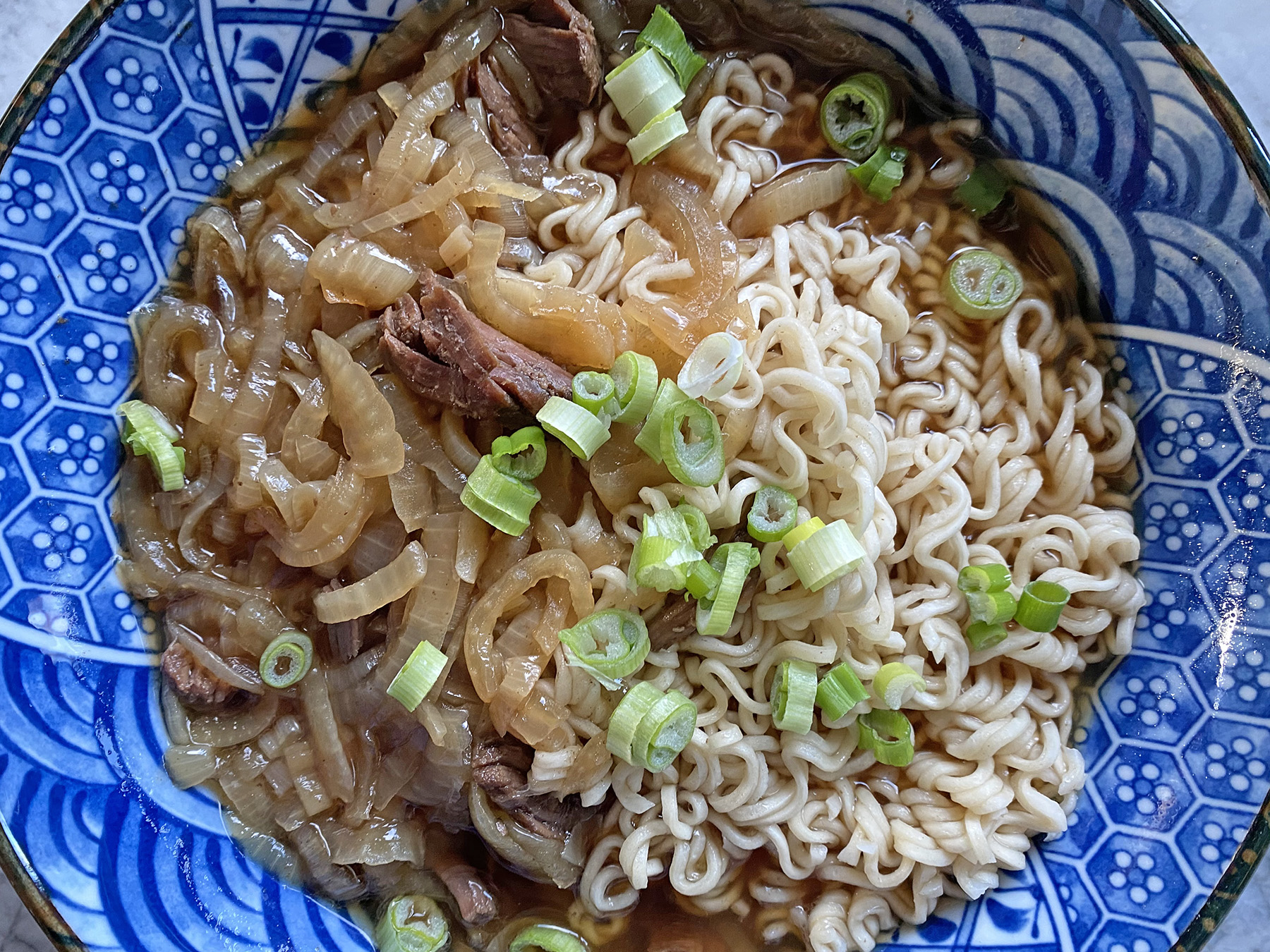 This is magnificent and thanks so much to Jen for sending me the Bon Appétit link!  This takes time (but it’s very worth the wait!).  I’m also making a note to myself here that this idea could work amazingly well with leftover smoked brisket and beef bone broth – enjoy!

kosher salt for seasoning the ribs and oil for browning them

6 scallions or green onions, white for cooking, green for garnish

8 cloves of garlic AND 1, 4-inch piece of ginger, peeled and thinly sliced

1/4 c. butter AND 5 Lbs. onions, thinly sliced (bribe a family member to do this for you, just saying)

~500 g. fresh or dried ramen noodles – I used 5, 100 gram Ichiban packets, which is a perfect amount for this whole pot of goodness, but I only cooked them as needed

Heat some oil in a large Dutch oven over medium-high heat and brown the ribs in batches, seasoning all generously with salt and transferring them to a plate once they’re finished – this should take a good 15 to 20 minutes.

Remove and discard most of the oil, leaving just enough to cook with at the bottom of the pot.  Turn the heat to medium and cook the scallions, garlic and ginger until they begin to brown, then add in all of the spices and stir and cook for a quick minute until the mix becomes very fragrant.  Add in the wine, be sure to scrape up all of the browned bits, and simmer for a couple of minutes until it’s mostly evaporated.

Return the ribs to the pot and pour in the soy sauce and water (or water and broth) and simmer all for about an hour and a half until the meat is falling off of the bones.

As the ribs are simmering, get out another large pot or skillet, melt the butter and cook the onion (season with salt) for about 15 minutes while stirring until they begin to brown a titch.  Turn down the heat to a simmer and leave the onions to cook for about 45 minutes until they are a deep golden color, but not mushy.

When the ribs are done, carefully remove them to a tray and once they’ve cooled enough to handle, remove and save all of the perfect beef, and discard the bones and extra fatty bits.  Strain the broth through a fine mesh sieve into a large bowl and discard the solids.

Now, into your empty large Dutch oven pot, add in the beef, the cooked onion and the strained broth and bring it all to a boil, then leave it to simmer for about 30 minutes to allow it to come together.  Add in the vinegar and taste for seasonings – you may wish for more vinegar or soy sauce (but I doubt it!). Cook the ramen noodles separately according to the package instructions and dish up portions as you wish into large bowls.  Ladle the French onion beef broth goodness into each, garnish with extra scallions or green onion and forget about all of that snow out your window!