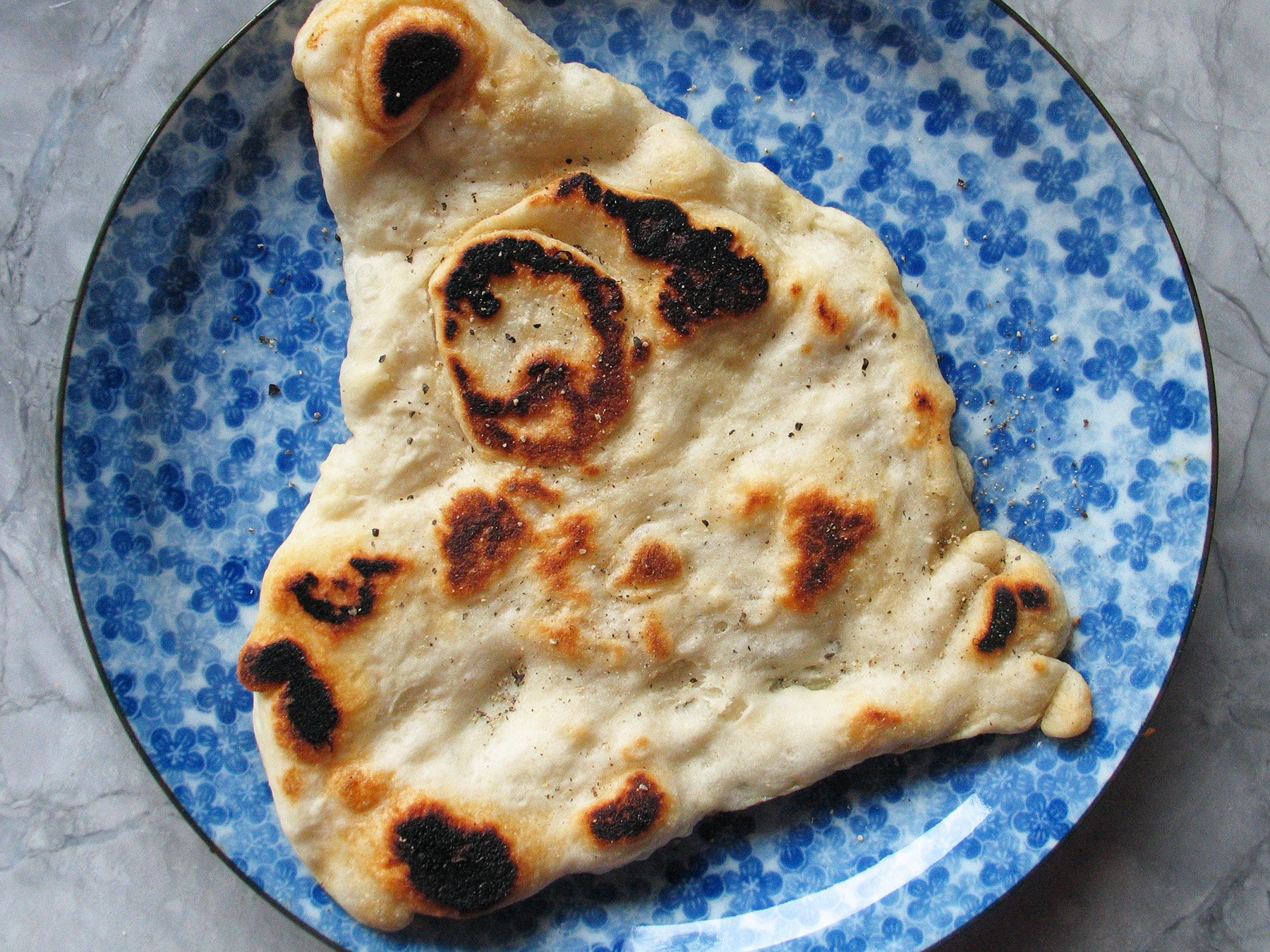 Borrowed from ‘Dining In’, by Alison Roman, this is a great treat to have on hand in your fridge…and it’s makes as many as you wish, depending on size (for us it was 8 very healthy-sized flatbreads).  I adjusted the directions only slightly (for me, because it’s so dry here), and I’m also quite certain the dough would be fine in the fridge for longer than a day – warm flatbread for weekday breakfast anyone? – enjoy!

oil for cooking, grilling or baking

In a large bowl, dissolve the yeast in the warm water with the pinch of sugar.  Using a sturdy wooden spoon or spatula, stir in about 3 cups of the flour, and combine until no large dry spots remain.  Cover the bowl with plastic wrap and allow it to rest for about 10 minutes – you’re letting the flour hydrate.

Stir in the sour cream, butter and salt and then a half to one cup of flour more – start with a half cup!  Mix well until all is well blended, you’re not kneading, you’re mixing, and this is where I found using one hand while turning the bowl with the other worked perfectly.  Make sure everything is well mixed, add more flour only if it’s too wet.  I have 2 large bowls so here’s where I lightly greased the new bowl, dropped in the dough, covered it in plastic wrap and let it sit for 2 hours.  Make sure the dough is in a large bowl!  It really rises!  At the end of the 2 hours, punch it down, cover it up again and then you can play with the timing.  If you’re making the breads the same day (as I did the first time), allow it to rise in a warm place for another hour (it will still get very large in an hour!), then put the dough in the fridge until you’re planning on cooking it – if you’re making the dough a day (or 2) ahead, definitely put it into the fridge after punching it down to slow the rising process.

The recipe suggests rolling out each piece on a lightly floured surface, but it also says that you want each piece as thin as possible and that using your hands to stretch it is recommended.  So I turned this into a family affair and everyone had a go at hand-stretching a flatbread – this also works well since I only cooked one at a time.  When you’re ready to cook/grill/bake, cut the cold dough into even-sized pieces – for us, that was 8 blobs.  We used a cast-iron pan, but I will update if we try these in the oven or on the barbecue.  Heat up a bit of oil in your cast-iron pan, and then working with one piece of dough at a time, lightly stretch it out over the backs of your hands and use your fingers to pinch and stretch the edges, allowing it to hang as you work your way around the dough piece and letting gravity give you a hand.  Don’t over think this.  You’re stretching a blob of dough (or rolling it out if you really want to), into a thin circle-like shape, preferably with no holes, and no matter how diligent you are every flatbread is going to look completely different after it’s cooked.

Drop the flatbread into your hot pan and cook for about 2 minutes per side until it’s bubbled, spotted and cooked through.  Repeat with remaining dough blobs, and if you have a well seasoned cast-iron pan then you probably won’t need to add oil in between breads.  Drizzle your ‘works of art’ with oil, butter, spices and eat as you wish – we liberally applied butter and freshly ground pepper and these were amazing with some really boring leftovers.  The following day I cooked the last couple for a snack for the girls, and they were just as tasty after the dough sat in fridge for an extra day – there’s no excuse not to try these!