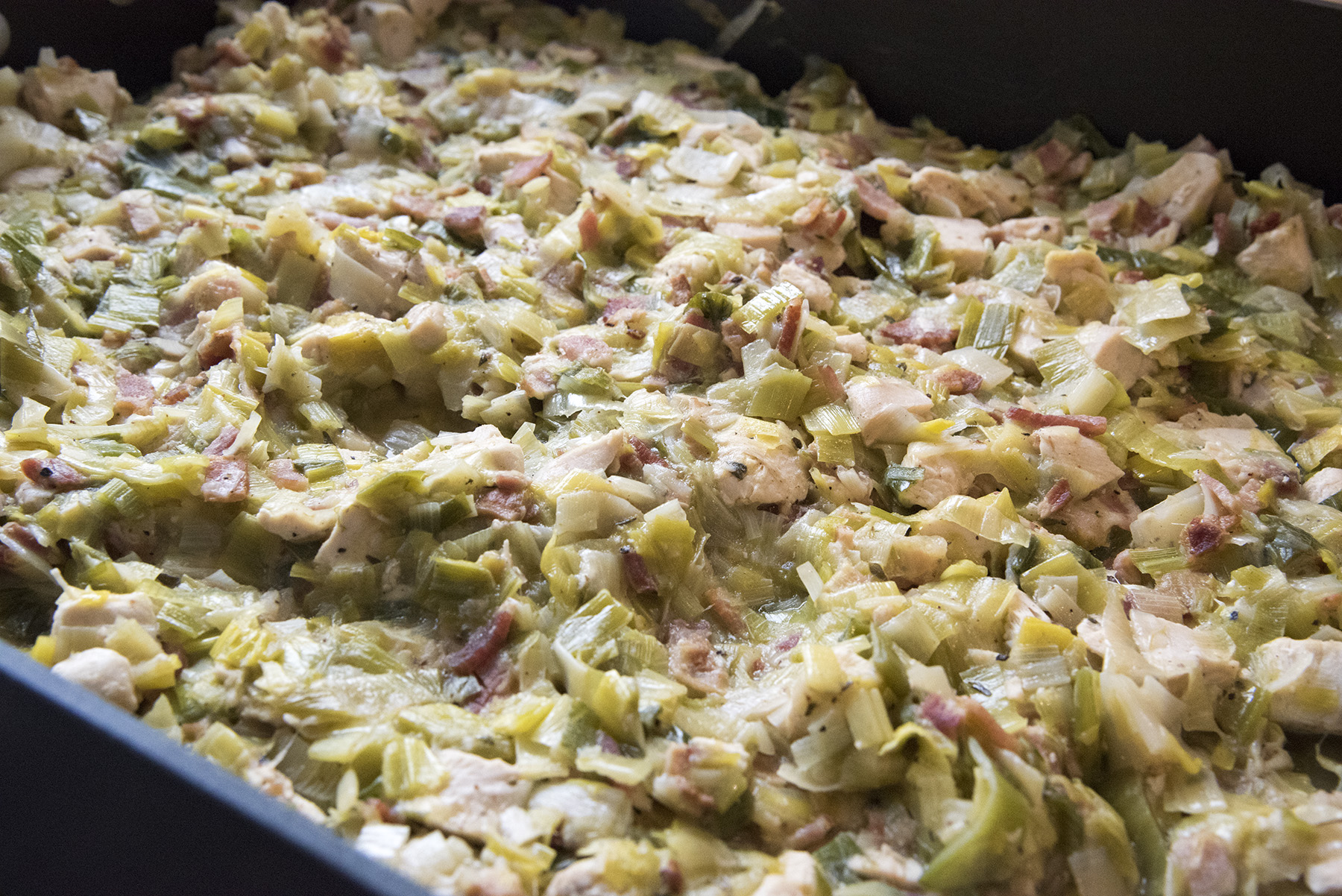 Jamie Oliver is the king of comfort food ‘pies’.  I’ve tried a couple of his recipes but when I saw this on the Food Network in his Christmas Special, I knew I’d be making this for everyone on New Year’s Eve (the recipe below, doubled, and in my roasting pan).  The time eaters here are the leeks, which can be washed and chopped ahead and refrigerated still wet, and the turkey or chicken, which needs to be cooked.  If that’s done, this is actually quite quick, and as New Year’s proved, excellent for company.  I looked the recipe up on the internet, and basically just added more bacon.  Soooo good!!

2 sprigs of fresh thyme, leaves only

olive oil and 1 T. of butter

12 roasted chestnuts, peeled and crumbled (you can find these in vacuum-packs)

2 sprigs of fresh sage, leaves only 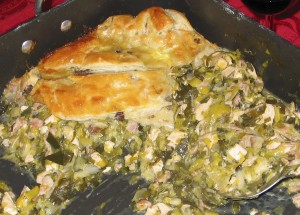 In a large pot or skillet (remember, it has to hold all of the leeks, but when they cook down they’re half the size), cook the bacon with the thyme leaves  for a few minutes until the bacon just starts to crisp up.  Add a ‘lug’ of olive oil and the butter and then all of the leeks and cook for a few minutes, stirring carefully, until they are well coated with the olive oil and butter.

Add the salt and pepper, put the lid on the pot and simmer for about a half hour, stirring occasionally so that they don’t stick.

When the leeks are nice and soft, add the turkey/chicken and stir, add the flour and stir until it disappears, pour in the broth, stir and then finally add the creme fraiche, stir and bring it to a boil, allowing it to thicken slightly.  Taste here for salt and pepper, but it should be fine.

Pour the mixture through a large sieve over a large empty pot or bowl and allow it to drain.  You’re draining off the gravy.

Grease a deep baking dish, like a 9 x 13 lasagna pan, and preheat the oven to 375.  Dust a clean surface with a good amount of flour and roll out the puff pastry until it’s about twice the size of the surface area of your chosen baking dish – roll it as evenly as you can, but it definitely doesn’t have to be perfect.

Scatter the crumbled chestnuts and sage leaves over half of the pastry, fold the other half over onto the chestnuts and sage, and give the whole thing a bit of a roll with the rolling pin to make it stick together.  You should now have a pastry sheet to cover your baking dish that’s like a chestnut and sage sandwich.

Pour the leek mixture from the sieve into your baking dish and spread around evenly.  Lay the pastry on top and tuck it in around all of the edges – again, rustic looking is just fine.  Score even lines with a sharp knife across the top of the pastry and then brush the whole surface with the beaten egg.

Bake for 35 to 40 minutes until the crust is a lovely brown and puffed up and when it’s ready, reheat the gravy and serve.

We had large portions with peas, gravy spooned over top and fresh bread.  It was wonderful.  Happy New Year!