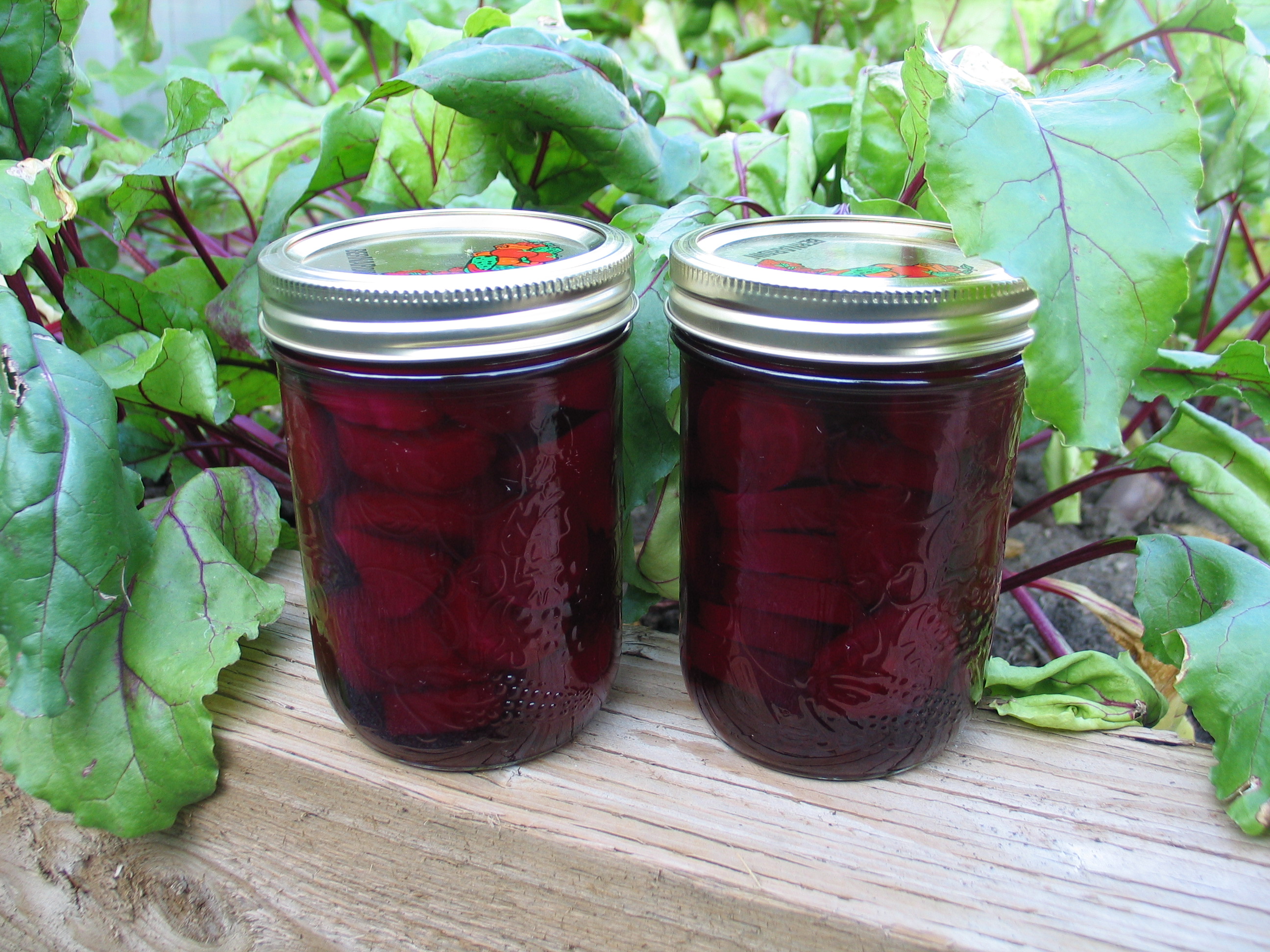 I’ve had a tough time trying to decide what recipe to post first.  Ideas included most requested recipe, favorite meal of all time, an ‘ode to our first garden’ etc.  Then Mom asked if she could come over and show me how to make beet pickles.  We have a crazy abundance of them and I’ve never done it before.  Perfect.

I have a 16 quart pot that was 3/4 full of beets, covered in water to boil – in the end, we got 9, 500ml jars.  The beets need to be dirt-free, but with only the greens/reds cut off.  Do not cut the beet itself! or the color will leak out as you boil them.

Boil the beets until you can poke them fairly easily with a fork – while they are boiling, use another large pot to start the brine – we made the following recipe times 4, and it was enough for the 9 jars.

Bring to a boil and simmer for about 5 minutes.

When the beets are cooked, rinse them once with cold water – wear gloves! – the skins slide right off, who knew? – then dice them into whatever uniform shape you wish and drop into the sterilized jars.  Fill the jars with the hot brine, leaving only about 1/4 inch –  the beets need to be covered – and put the lids on.  With this recipe, the jars don’t need to be processed, but they should sit for a couple of days until the lids ‘pop’ and you know you have a solid seal.  Mom also recommended that I not eat any for at least a week, in order to allow proper ‘pickling’.

For dinner tonight, marinated pork tenderloin – or, what I decided on after foraging in the freezer – adapted from a recipe out of Cooking Light’, which I call; 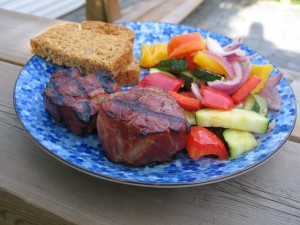 Bring the first 3 ingredients to a boil and then reduce to about 2/3’s – this should take about 10 minutes.  Cool completely and then pour over the pork (I cut it into pieces large enough to drop on the BBQ), and refrigerate for a couple of hours.

If you have the time, you can cut the pork into smaller pieces and thread them on skewers with pineapple and red onion. 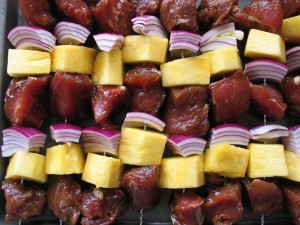 Once the meat is cooking, you can re-boil the marinade (a rolling boil, for a good 5 minutes), and then use the sauce over rice.

Tonight I skipped the rice because we had some fresh bread, and I sauteed some red onion, zucchini (from the garden),  orange and red peppers together with a bit of crushed garlic and a sprinkling of sea salt.  Dessert was raspberries, straight up, right off the bushes in the backyard.  Yum.